The machine room-less (MRL) elevator is relative to the machine room (MR) elevator, which is using modern production technology to miniaturize the equipment of machine room as far as possible while maintaining the original performance, move the control cabinets, traction machine, governor, and other parts to top or sides of elevator hoistway, thus the traditional machine room was cancelled, in order to meet the customer’s special requirements for height and roof. 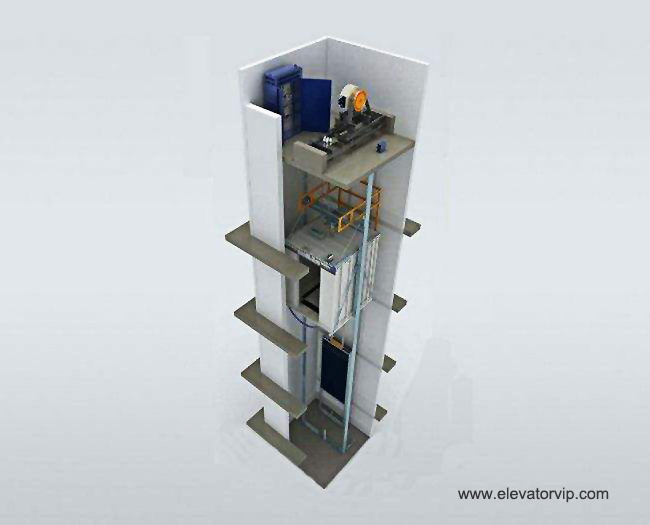 There are two kinds of methods for place MRL elevator: 1st is that the host is placed on the top car; 2nd is the guide wheel is connected through the shaft. No matter which of the above methods is used, the impact of noise is very great because of using steel connection, and the noise must be digested in the well, plus the sound of the brake, and the fan’s voice will be amplified. Therefore, in terms of noise, the MRL elevator is significantly larger than MR elevator. In addition, due to the rigid connection of the host, the resonance phenomenon is inevitably transmitted to the car and the guide rail, and the influence on the car and the guide rail is relatively large. Therefore, the comfort of the MRL elevator is significantly weaker than MR elevator. Due to the impact of these two items, the MRL elevator is not suitable for high speed trapezoids above 1.75/s. In addition, due to the limited supporting force of the shaft wall, the load-bearing capacity of MRL elevators should not be more than 1150kg. Excessive loading capacity imposes excessive load on the shaft wall, and usually the thickness of reinforced concrete is about 200mm, and brick-concrete structure is about 240mm, both of them are not suitable for carrying too large, so below 1.75m/s or 1150kg situation, MRL elevator can be replaced MR elevator, but for large-capacity or high-speed elevators, MR elevator is significantly better than MRL elevator.

The calorific value is relatively large during running of elevator. At the same time, its various electronic components (elevator spare parts) are relatively poor in the ability to withstand high temperatures, now, MRL elevator and MR elevator are used permanent-magnet synchronous gearless driving machine. The temperature of the permanent-magnetic synchronous motor should not be too high; otherwise it is easy to cause the “loss of magnetism” phenomenon.

Through the above comparative analysis, MRL elevators and MR elevators are the same in their use, and their safety performance is also the same, but their respective advantages and Drawbacks are different. The owner can choose MRL elevators or MR elevators according to actual needs.