The elevator light curtain consists of three parts: the infrared transmitter and receiver installed on both sides of the elevator car door and the special flexible cable. It is a door system safety protection device.

The operating principle of elevator curtain is as follows:

There are several infrared transmitting tubes inside the transmitting end of the optical screen. Under the control of the micro-control unit, the transmitting receiving tube is opened successively, and the light emitted by one hair color is received successively by multiple receiving heads, forming a multipath scan. It will be formed a dense infrared protection screen through this top-down continuous scanning car door area. When any beam of light is blocked, because the circuit at the back end of the receiving head cannot realize photoelectric conversion, the light curtain is judged to be blocked, so an interrupt signal is output to the portal machine. This interrupt signal can be a switch or a high or low level signal. After receiving the signal given by the light curtain, the elevator door machine will immediately output the opening signal, and the car door will stop closing and reverse open, and the elevator door will not close normally until the passenger or barrier leaves the warning area, so as to achieve the purpose of safety protection and avoid the occurrence of the elevator sandwiching accident.

The above mentioned principles of the elevator screen work have several basic concepts:

Another concept is the number of eyes and the number of beams. Many people now judge the quality of the screen simply by the number of beams, and many tender documents simply say “require more than 150 beams”. This is actually a wrong idea. Light eyes, usually in pairs, one launch, one reception. The light curtain USES the scattering principle to realize multipath scanning. Due to the scattering property of light, the light emitted by one emitter can cover up to five receiving heads at a distance, scanning one by one. Of course, the top end and the bottom end of the hair receiving head, there will be three beams of light because of the scattering Angle of the physical reasons can’t receive. So 16 of the first 5 scans minus 3 of the top and the bottom 3 of the top is 16*5-6=7 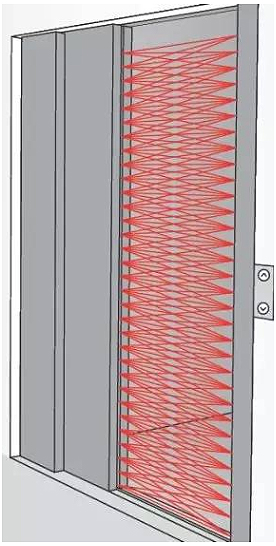 What is the important role of the light curtain (Car Door Detector/Sensor) in the elevator?

As the protective device of the door system, the most important evaluation factor is reliability.

Light curtain as an electronic product, the reliability of optical screen also depends on its electromagnetic compatibility, and its strong electromagnetic tolerance (EMS) is a key index to measure its reliability. Faulty elevator doors account for a large proportion of casualties. “A protective device should automatically re-open the door when a passenger is struck or will be struck by a door leaf as he/she passes through the entrance of the car while the door is closed,” according to both international and regulatory requirements. Therefore, all the lift out of the factory will always have a door protection product – light curtain.